Purple Porsche Politicians Are Not What Malaysia Needs

An UMNO Division Chief’s Porsche was involved in an accident around Damansara recently.

According to a video published on social media, the driver of the Porsche escaped unscathed.

Checks online found that the Porsche is a 911 GT3 model with a reported market value of RM1.77 million in Malaysia.

The source added, the vehicle is registered under Koperasi Suara Anak Muda Selangor Berhad, of which Armand is the President

Malaysia Sentinel cannot independently verify the revelation, but other sources close to the incident have been reached for comments.

Checks on social media also found that Armand who is also an UMNO Supreme Council member had on 14 May 2022 uploaded a video to TikTok. The video showed a brief view of a Porsche of a similar model, colour and body sticker in the background.

He was appointed a Senator in October 2021.

In December 2021, the Ministry of Health gave Asia Coding Centre Sdn Bhd, a company in which Armand is a Director, the green light to begin a trial run and deployment of Covid-19 screenings at international entry points. 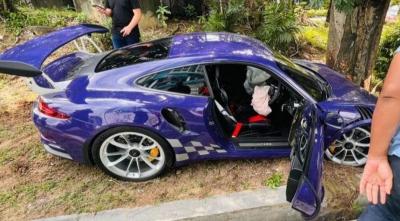 This is surely a picture and set of circumstances emblematic as to why the jailing of a few top dogs is not going to suffice to purge the rot from UMNO.

Even a division chief feels compelled to drive around in a ludicrous toy vehicle worth nearly two million ringgit, money that plainly ought to have been put to good use by the so-called Koperasi NGO it was bought in the name of and which this ‘political leader’ was in charge of.

And that is before we address the matter of the enormous government Covid contract handed to this gentleman’s business by his pals who seized office by overturning the government that had been elected by the people, thanks to a large degree through plain bribery.

If that contract was awarded to this UMNO playboy via open tender this would definitely be the time to go public with those details.

Malaysians do not deserve to be ‘represented’ by the man-child spivs and crooks who have taken over UMNO. An entire industry of western and Japanese big toy motor vehicles thrives off a club of buyers almost exclusively from places like Malaysia and the Gulf – many of them purporting to be super-religious Muslims, who nonetheless don’t seem to be able to find a better cause for their money.

Vote in serious people with adult minds and an anti-corruption agenda for reform, before all Malaysia’s money ends up with nothing more to show than twisted rust heaps like this embarrassing display.