Having initially denied the matter, the Conservative hierarchy have now acknowledged their appointment of a billionaire from Egypt, Mohamed Mansour, to be the new ‘Senior Treasurer’ of the party.

Mansour is an Egyptian born businessman who was a minister in the government of Hosni Mubarak, a President who wielded dictatorial powers over Egypt for three decades before being overthrown and imprisoned for corruption following a popular rebellion in 2012.

Mansour’s Wikipedia page describes him as an Egyptian living in Cairo, however it has yet to be confirmed by the party whether he enjoys ‘non-dom’ tax status in the UK (as did the prime minister’s Indian billionaire wife until he faced criticism during the leadership race and she changed her status).

The fundraising ‘treasurer’ post has attracted increasing controversy over recent years in that it is invariably now offered to super-wealthy individuals who then themselves donate eye-watering sums of money to the party, before being offered a peerage.

Mr Mansour has already donated over £600,000 through his private company Unatrac and was appointed to the government’s advisory investment council in his capacity as the founder of Man Capital, a family owned company.

Sources have informed Sarawak Report that he has further pledged an additional two million pounds to help revive the party’s coffers in the run up to the next election…. and  that his name is already on the next roster of those to be granted Lordships through Boris Johnson’s second up-coming ‘Leaving List’, due to be published as early as Friday. 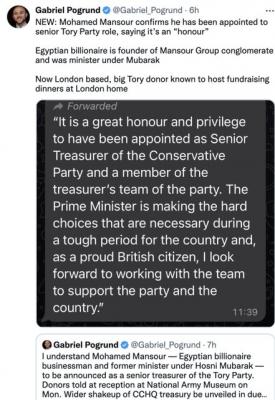 Mansour admitted the appointment today after denials by Conservative HQ

After the initial denials were undermined yesterday by an acknowledgement from Mansour himself that he had indeed been appointed to the post (the decision was announced by Rishi Sunak himself during a function for Tory donors on Monday evening) the party chairman Nadim Zahawi rallied to add his gushing confirmation and praise for “our fantastic new Senior Treasurer”, whilst taking issue with journalists who have reported on the matter.

Mansour has long been a member of the so-called 250 Group of donors to the party, developed by the former chairman under Boris Johnson, Ben Elliot, which controversially allows exclusive access to ministers for donors who have provided over half a million pounds.

Both Rishi Sunak and Nadim Zahawi (multi-millionaires themselves) have attended 250 Group meetings hosted by Mohamed Mansour and have enjoyed extensive further entertainment at his palatial London residence according to insiders.

The group has also been criticised for including several wealthy individuals with extensive, often dubious, foreign connections, including Russian oligarchs and fugitives from their home countries – such as the Venezuelan billionaire fugitive exposed by Sarawak Report, Julio Herrera Velutini, who has now been charged with bribing politicians in the United States (Herrera Velutini was also a client of Ben Elliot’s PR firm Hawthorne Associates and of his ‘concierge company’, Quintessentially).

However, today Zahawi challenged journalists who had pointed out Mansour’s Egyptian connections, tweeting to the Times “I’m sure you didn’t mean to omit that that our fantastic new Senior Treasurer is a proud ‘British’ citizen, did you?  After all, you wouldn’t still refer to me as Iraqi right?” (Zahawi came to the UK aged 11 but has extensive oil interests in his native Kurdish region of Iraq).

The target of the complaint pointed out that if the Conservative party had responded to their multiple enquiries on the subject they could have affirmed that citizenship detail, but it did not.

Meanwhile, a glance at Mansour’s Wikipedia page, which has already been updated to include his new position as Senior Treasurer, continues to indicate that whilst having doubtless procured British citizenship the businessman politician considers himself primarily to be Egyptian.

The page opens with this summary:

“Mohamed Mansour (born 1948) is an Egyptian billionaire businessman and former politician. He is the chairman of Mansour Group, a US$6 billion conglomerate. In November 2019, Forbes estimated his wealth at $2.3 billion.”

“Mohamed Mansour was born into one of the most prominent business families in Alexandria. The family business, Mansour Group, controls nine of Egypt’s top Fortune 500 companies…….
With his two brothers, Mansour maintained an active role in the Mansour Group, the family business, building close ties as distributors for US companies including Chevrolet, Marlboro, General Motors and Caterpillar.[2] Some of his other interests include Metro, the largest Egyptian supermarket chain, and McDonald’s franchises in Egypt.[1]
Mansour has led the group since his father died in 1976.[4] Since then, he has overseen all the major corporate developments, including setting up the company’s private investment subsidiary Man Capital in London.”

The page ends with the statement:

“He is married with two children and lives in Cairo”

If, instead, Mohamed Mansour is now primarily a proud British citizen based and with his business interests primarily in London, one wonders why he did not trouble to have these details altered at the same time that information was added about his elevation in the Tory Party?

Indeed, Conservative critics have themselves pointed out that, owing to recent legislative moves, migrants tragically risk their lives daily in Channel crossings not least because even the Home Secretary can no longer explain a route whereby non-wealthy asylum seekers can legitimately apply for citizenship (as Zahawi’s parents did).

By contrast, the introduction of so-called Golden Visas has meant that the wealthy and politically connected from across the globe have been able to acquire UK citizenship and the ability to buy influence in political parties through donations, simply by forking out some cash.

Recent examples of appointments made under Johnson’s former party chairman Ben Elliot have thrown the system of Conservative party treasurers, their immense donations, often foreign political connections and then receipt of peerages into sharp relief.

The last Tory treasurer, Malik Karim, is a devotee of the Aga Khan whose controversial sect has been embroiled in major money laundering prosecutions across the globe. Karim soared from a sacking from Credit Suisse to his present status as the ‘richest Muslim in the City’ in the aftermath of the financial crash and credit crunch. A full length portrait of his super-wealthy religious leader (who is also the ‘global founding patron‘ of King Charles’ ‘Prince’s International Trust’) hangs in the hallway of his home. Removed by Rishi Sunak Malik has yet to receive a peerage.

His predecessor, Ehud Sheleg, is married to the daughter of a Russian oligarch and, according to reports in May, has had a bank alert filed with the National Crime Agency for transferring £450,000 provided by her father in 2018 through off-shore transactions into a donation to the Tory Party that was purportedly from himself. Foreign donations to UK political parties are illegal.

Sheleg also has strong personal loyalties to another foreign country as a born Israeli. His own Wikipedia page quotes him saying “I was brought up, albeit in Israel, with the sentiment of very strong ties to Britain. In the family of nations, this has to be my favourite one. Second to my homeland, of course”.

Prior to him on the Wikipedia list of party treasurers is Aamer Sarfraz, whose family and wealth derive from Pakistan where they have been politically well-connected. Following a degree course and later a couple of years working in the UK, Sarfraz was made a Lord in 2019, just months after becoming a Tory party member, at the staggeringly youthful age of 38.

He says this was owing to his new found enthusiasm for Tory politics and his fundraising efforts for the party amongst Pakistani origin communities, rather than any diversion of his considerable foreign family wealth. He has indicated to Sarawak Report that he nonetheless considers it time the system of awarding peerages was reformed.

Prior to these, the major donor and party treasurer Peter Cruddas was appointed a Lord by Boris Johnson despite his involvement in the so-called Cash for Access scandal and in defiance of the recommendation by the House of Lords Approval Committee that he should be denied the peerage.

Likewise, the newspaper owner Evgeny Lebedev (a personal friend and donor of holiday hospitality to Boris Johnson) is now Lord Lebedev ‘of Hampton and Siberia’ despite warnings from the security services that his father was a Russian spy-master.

Mansour has his own awkward past. Having resigned as transport minister in the Mubarak government following two serious train accidents in 2009, he together with his brothers and cousin, a former housing minister named Ahmed El-Maghraby, launched Egypt’s controversial Palm Hills Developments as part of their sprawling family concerns.

The company and CEO (Mansour’s brother) were convicted in 2011 with using their political influence to obtain the land illegally from the state at below market price and, according to reports at the time, the former ministers “faced charges of profiteering from their positions as ministers and plundering of public money“.

However, by 2012 the person bringing the prosecution withdrew and the case against Mansour and his immediate family were dropped, although his cousin and key business partner El-Maghraby was imprisoned with a five year sentence over separate corruption charges relating to other land deals.

The Conservative party, replete with millionaire cabinet members, is plainly anxious to raise funds swiftly and simply before the next tough election campaign and apparently sees no harm in offering access and influence to members of a super-wealthy global elite who are prepared to pay.

Yet, leaving an open door to the party of government in such a way to conflicted and powerful political interests potentially also from abroad has already been proven disastrous by the Russia scandal, whereby prominent donors to the party have now been sanctioned as Putin’s catspaws.

As one disillusioned donor has articulated, Rishi Sunak promised in his first statement as prime minister to bring “integrity, professionalism and accountability” to Number 10 and yet this latest appointment is just more of the same.