Webs Of Influence And Revolving Doors - Who Monitors CT Group?

Hovering behind the leadership bids, and once in office the policy units, of both Liz Truss and Boris Johnson has been the shadowy lobbying and PR conglomerate, CT Group, run by the Australian right wing political strategist, Sir Lynton Crosby (the knighthood was bestowed by a grateful Cameron after Crosby managed his 2015 election win).

The latest shenanigans within the Conservative party have highlighted troubling aspects as to how this outfit operates and how it appears to disguise apparent conflicts by operating at arms length from target politicians simply through swapping official roles and companies.

Examples appear to be the distancing of clients connected to the group that include former Tory leadership candidate Nadhim Zahawi and also Fathi Bashagha a Libyan rebel politician who is seeking to overthrow the elected government which has been recognised internationally and by the United Nations.

Both these individuals have featured in the recent re-packaging of CT Group’s founding former partner, Mark Fullbrook, who has operated as an independent consultancy over the past tumultuous months of Conservative government where both CT Group and Fullbrook have been at the helm of rival leadership campaigns.

During the earlier Brexit turmoil CT Group emerged as key backers of Boris Johnson having supported his previous mayoral campaigns funded by donors such as party treasurer Jonathan (now Lord) Marland and the billionaire Reuben brothers from Russia.

Fullbrook had claimed to have taken a sabbatical from his job at CT Group and worked for free with colleagues, including Isaac Levido and David Canzini, on Boris Johnson’s successful Conservative leadership campaign. Both Levido and then Canzini later joined the government as Downing Street advisors to Boris Johnson.

At the end of March this year Fullbrook then quietly left the CT Group partnership he had presided over since 2012, severing his directorships with a swathe of global subsidiaries of the firm.

This was shortly after the Department of Justice and FBI had started making enquiries into the group’s involvement in a Puerto Rico election where the election services of the firm had been allegedly offered as a bribe to the sitting governor as an incentive to block investigations into an offshore bank (a story broken by Sarawak Report). Fullbrook had been the point man on the contract.

By April Fullbrook had set up Fullbrook Strategies as a apparent rival to his old company. However, notably, his former partner Lynton Crosby was on the advisory board as was the Australian billionaire and Tory donor, Michael Hintze, known to be a close ally of Crosby.

In this capacity Fullbrook began to service the leadership campaign for the wealthy businessman MP Nadhim Zahawi, Secretary of State for Education and briefly Chancellor under Boris Johnson. According to reports, it was Fullbrook who advised Zahawi (the second richest member of the cabinet) on his brutal strategy to first take the Chancellorship following the resignation of Rishi Sunak (the richest) and then to almost immediately resign himself, precipitating Johnson from Downing Street (Zahawi has now declared himself a Johnson backer in the repeat contest).

All this period CT Group itself, and particularly Lynton Crosby, continued to act as close advisors to Boris Johnson as he strove to cling to office, raising concerns that the separation of these once close knit partners owed more to the desire to ride rival horses in the same race as the Boris government imploded than a genuine business split. 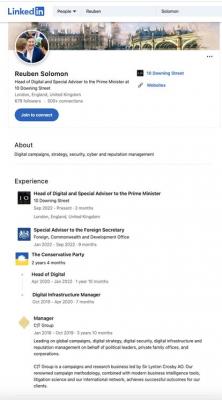 That concern strengthened when Zahawi crashed from the race to be replaced as a front-runner by Liz Truss, who immediately inherited Fullbrook as her campaign strategist, together with David Canzini and another CT Group veteran Reuben Solomon (who had secretly run a mysteriously funded pro-Brexit campaign on social media during the 2016 referendum whilst working for CT Group, before moving to act as the Conservative party’s online media strategist for the next two years).

Following her victory all thee of these ex-CT Group personnel acquired policy posts in Downing Street, along with other Fullbrook Strategy employees who included the wife of Jake Berry, Truss’ newly appointed Conservative party chairman (whom she has knighted). Fullbrook became the new Downing Street Chief of Staff.

By this means, observers have noted, personnel until recently associated CT Group maintained an inner seat in government despite the change of prime minister. Observers also note that Truss was herself supported by Boris Johnson to be his successor. Former close ally Dominic Cummings indicated at the time that Johnson did so on the grounds that she was an insane ideologue – “human hand grenade”/ “mad as a box of snakes” – who would soon create havoc and thereby open a path for his return.

Cummings publicly suggested this was the plan before Truss indeed proved herself to be an incompetent ideologue, created havoc and opened a path for Johnson’s’s return. Mr Cummings tweeted July 20th:

“Why is the [trolley emoji – meaning Boris Johnson ] supporting the supporting the human hand grenade [ Liz Truss ]?
“Cos [trolley emoji] knows she’s mad & thinks she’ll blow & he can make a comeback… He knows she is mad as a box of snakes and is thinking ‘there is a chance she blows, there’s another contest and I can return’.

Continuing to support Johnson, should he be successful, are Lynton Crosby and major donors such as the disgraced Lord Cruddas (whom Johnson ennobled in the face of opposition by the House of Lords Appointment Committee) who has been whipping up support for a ‘Bring Back Boris’ campaign amongst party members since the day he was forced out.

The Daily Mail editor, Paul Dacre, heavily campaigned together with other pro-Johnson media to promote Truss as a credible candidate during the leadership election, before the paper rounded on her mistakes. He is known to be on Boris’s planned resignation honours list, as revealed by a CT Group advisory paper to the former prime minister, again revealed by Sarawak Report.

Why is it so important for CT Group to back the winning candidate in a British leadership election, one might ask, given that the vast majority of its earnings come not from political clients but from a swathe of corporate interest, foreign powers and wealthy individuals? Crosby in fact funded Boris’s election campaign and not the other way around.

The answer might appear to be that CT Group’s value as a lobbying, PR strategist and political influencer on behalf of its major clients comes, above all, from that inside seat in government where former CT Group employees ensconce themselves as advisors at the side of the politicians they helped campaign for.

There are few rules against this revolving door for lobby group personnel and likewise few rules of disclosure. Hence, when it emerged in the past days that Mark Fullbrook retains a 10% shareholding in CT Group it was announced that what rules there are had been satisfied since these undisclosed interests had been put in a managed ‘trust’.

Thus, it is claimed, no conflict of interest could be said to exist between Fullbrook’s role as Chief of Staff to Liz Truss and his shares in a PR and lobbying group. Really?

Johnson’s own Conservative chairman, Ben Elliot, maintained a similar ‘distancing’ between his own PR company and political role of course. It did not discourage the Venezuelan fugitive billionaire Julio Herrera Velutini (now facing charges in the United States) from both donating to the Conservatives and hiring Elliot’s PR company to promote his business.

Neither does CT Group have to disclose its own clients under present rules, despite the fact that endless recent personnel are floating around the corridors of power. Nonetheless, it is established that those clients include members of the tobacco, gambling, alcohol, foods, fossil fuel and mining industries.

When CT Group was commissioned secretly by Boris Johnson to produce a plan to stuff the House of Lords with newly ennobled compliant peers, one piece of legislation that was envisaged in its ‘Project Homer’ report was the relaxing of tobacco regulations.

Sarawak Report can also disclose that Nadhim Zahawi’s connection with CT Group pre-dates his hiring of Mark Fullbrook during the leadership contest. The Iraqi born  businessman is of Kurdish background and achieved a lucrative role as chief strategy officer to the oil company Gulf Keystone which has obtained major concessions in the area controlled by the Kurdistan Regional Government under the governing Kurdish Democratic Party (KDP).

It has emerged that a leading member of the KDP was paid kickbacks by Gulf Keystone to seal the deal, nonetheless a London court found in favour of the company against a rival claimant in a bitterly fought case in 2013. CT Group were hired as strategists by the winning side according to information received by Sarawak Report.

Likewise, Fullbrook’s other headline client since setting up his own consultancy in March, the Libyan rebel politician Fathi Bashagha as first published by the Guardian. 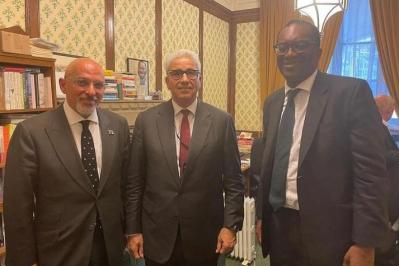 Sunday Times has now revealed that Fullbrook had by June already organised a tour for this foreign political figure in the UK to lobby government decision makers as part of his campaign to entice western powers away from their support of the present leadership of that country. Bashagha is supported by Russia and the mercenary Wagner Group as it seeks the military overthrow of the Government of National Unity (GNU) in Tripoli, established last year through a UN-led process. 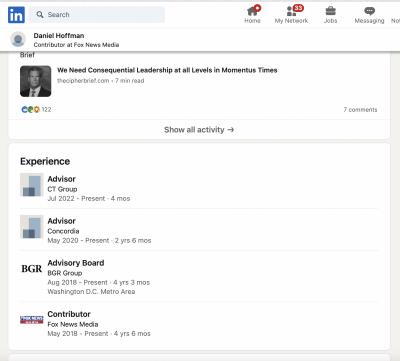 The Connection between the Libyan political warlord client and Fullbrook Strategies appears to have links to CT Group, Fullbrook’s only too recent partner in lobbying

The ministers who agreed to see Bashagha in the UK, according to a photograph placed on Bashagha’s website record of the visit, were none other than then Business Secretary Kwasi Kwarteng and Nadhim Zahawi.

It is therefore worth an explanation as to how exactly Mark Fullbrook’s company came to represent Bashagha so swiftly after forming in March, given that Sarawak Report has yet again traced an interesting connection to CT Group.

The individual who has managed Bashagha’s campaign, according to several reports, including promoting a positive image in the Washington Times, is BGR’s Advisory Board member Dan Hoffman.

Hoffman is an ex-CIA agent who worked in Libya and appears as a contributor on Fox News. Just last July he also joined CT Group as an advisor, leaving a valid question as to why it was the ostensibly independent Fullbrook Strategies who hosted this hot potato Libyan contact in the UK and not CT Group itself?

It leaves further valid questions as to whether sufficient disclosure and transparency rules currently exist to flush out continuing networks and ties between major corporate lobbying outfits and their former operatives as they move in and out of Downing Street influencing policy formation by the political appointees they helped put into office through campaigns for which the funding has not always been completely clear.