Now, in the so-called Littoral Combat Ships (LCS) case (2010-present and also involving DCNS), the day of reckoning looks set for the German manufacturing giant Rheinmetall, which took a central role in the alleged middleman scam whereby nearly a billion ringgit was siphoned out of the Boustead Naval Shipyard contract to build six new ships for the Malaysian navy.

However, if that relatively modest sum was his alleged kickback, it is the overall scheme that funnelled a billion up front out of the RM9 billion of public money ploughed into the BNS project which needs looking at – likewise the the big fish behind it.

Think again of Najib Razak, who had by 2009 ascended to the job of prime minister and finance minister who signed off on the monster shipbuilding investment and then bunged in billions up-front for alleged procurement costs (a trademark device he also employed in the bogus 1MDB ventures and bogus pipeline contracts).

Also, his side-kick Zahid Hamidi who as Defence Minister signed off on a switch of design in 2011 from the Dutch model preferred by the navy to a model provided once again by Najib’s tried and tested collaborators at DCNS, thereby putting the project in the hands of people Najib could ‘work with’.

And, next in the pecking order, the man charge of the overall contract who was none other than Najib’s trusty side-kick, Lodin Wok Kamaruddin, boss of the armed forces fund LTAT and chairman of its manufacturing subsidiary BNS, which was commissioned to build the ships by Najib’s government in 2010.

Lodin had, of course, also been on the board of the shadowy private company Perimekar Sdn Bid, which was paid €114 million in 2001 as a kickback from France’s DCNS contract during the earlier Scorpene submarine scandal. This was money described by a French court as being a bribe to Najib who was then Defence Minister.

PKR’s Deputy President, Rafizi Ramli, has laid out the stark figures that explain how the billion ringgit disappeared through the procurement contracts which were put in the hands of a company set up for the job in 2010, namely Contraves Advanced Devices Sdn Bhd, as a middleman between Boustead and DCNS.

That company was managed by Rheinmetall and its local CEO of the time, an Australian name Gordon Hargreave, who now need to explain their role in this affair. 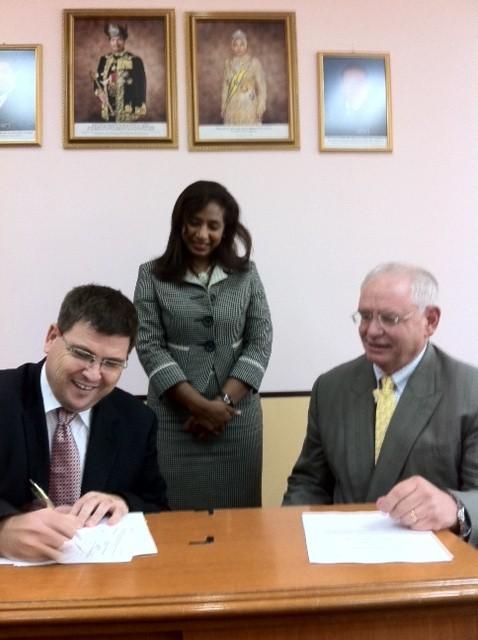 Hargreave signing a deal as CEO of Contraves in 2011

Sarawak Report identified Contraves as the vehicle through which the money disappeared in January. Rafizi has now demonstrated how RM1.185 billion was paid for procurement into Contraves which he says was in turn only billed RM397 million for the items purchased from DCNS. Simple as that!

In January a Malaysian woman who is the current CEO of Contraves was arrested and questioned by the MACC. Sylvia Sinniah had proven an unconvincing witness when questioned by the Public Accounts Committee having claimed that all was well with the accounts but providing little evidence to back those claims.

However, the person in charge at the time was the original CEO, Mr Hargreave, who has long been a senior player in the arms business in Southeast Asia and who still works with Rheinmetall based in Singapore, according to his LinkedIn.*

He and not Sinniah was the CEO of the Contraves venture at the time of the deal with Boustead according to the announcements of the day (the company website has now been taken off-line). 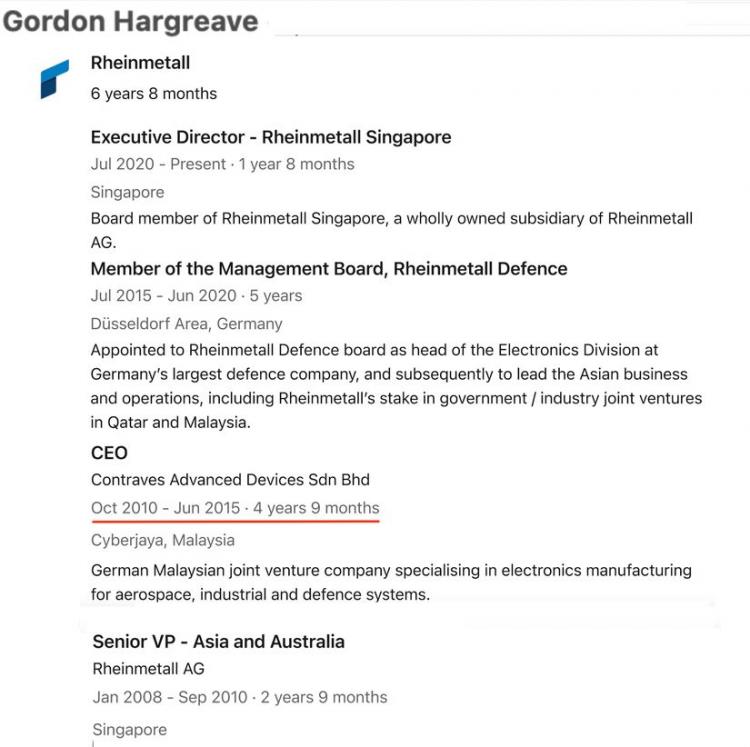 Therefore, as the man in charge perhaps he can now step forward and detail how it was that Contraves was brought in to handle procurement and then received RM1.185 billion for purchases recorded as costing RM397 million?

According to information now obtained by Rafizi Ramli, Contraves Advanced Design (CAD) had created a second subsidiary named Contraves Electrodynamics Sdn Bhd (CED) which acted as yet another middleman ‘layer’ between the original commission and the placing of the order with DCNS.

By this means, explains Rafizi, the cost of the purchase order from DCNS was inflated by 200% by the time the bill was presented to the commissioning company Boustead Naval Shipyards (BNS) in its Letter of Agreement (LOA): 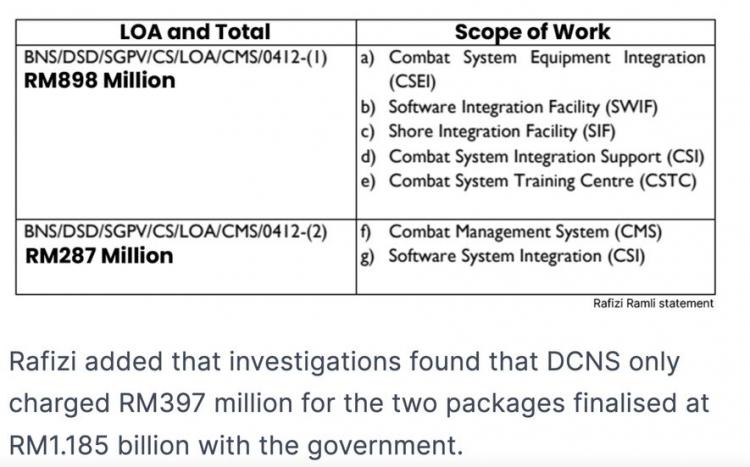 The figures released by Rafizi earlier this week

In fact, as PKR Deputy President Rafizi Ramli pointed out, there was no need to appoint such an intermediary in the first place. Neither was this company even suitable for the task. Rheinmetall is a manufacturer of tanks and also aircraft, but has never had anything to do with boats.

Moreover, Rafizi points out that the structure of the deal with Contraves (as implemented by Gordon Hargreave) inexplicably handed complete authority over the procurement process (and the vast sums of Malaysian public money put into it) to the outside hands of the German company and himself, as the boss of its subsidiary.

In a manoeuvre reminiscent of the 1MDB ‘joint venture’ with PetroSaudi a few months earlier Boustead had been steered into buying a 51% share of this existing Malaysian subsidiary of Rheinmetall, namely Contraves Advanced Devices Sdn Bhd, thereby turning it into another ‘joint venture’ for BNS’s own procurement activities.

Yet, in an extraordinary decision (which Rafizi says was authorised by the LTAT Board, although the Chairman of the time, Loden Wok Kamaruddin, says he can’t remember) the operational management of the company and the Malaysian public money placed in it was directed to remain with the German entity, handily taking all the accounting and decision making out of the country and Malaysian control.

PetroSaudi (in cahoots with Najib’s proxy Jho Low) had been given control of 1MDB’s billion dollars by a similar ruse in 2009 resulting in the loss of the billion dollars placed into the ‘joint-venture’ contract. Najib’s familiar fingerprints are therefore all over the deal making the loss of over 70% of the money placed into the ‘joint-procurement vehicle’ extremely troubling and worthy of immediate explanation from the German party to this affair.

As the press release on the agreement “implemented” by Mr Hargreave explains, Boustead (BNS) had bought 51% of the company yet:

“Rheinmetall retained a 49% share in Contraves Advanced Devices and control of the operational management.”

It was, says Rafizi in an announcement made last week so far insufficiently emphasised by Malaysian and foreign media, a sign of a pre-meditated move to place control of the huge sums of public money assigned for procurement for these ships in the hands of this appointed intermediary:

“Due to the illogical decision, CAD [Contraves] is only owned by Boustead (and LTAT) on paper…. Aside from controlling CAD’s management, RAD’s representatives were also given the authority to sign cheques and approve spending without needing to refer to BHIC’s representatives in the company…
Under whose influence and interference that RAD was brought in despite information available at the time showing that they did not have the full range of expertise to handle the project?” [Malaysiakini]

For the ensuing years, until Hargreave ‘abandoned ship’ in 2015 as the scandals around Najib started to implode this CEO and Contraves proudly promoted the German company’s role in the beleaguered project that has yet to deliver a single ship despite having spent the entire RM9 billion budget. 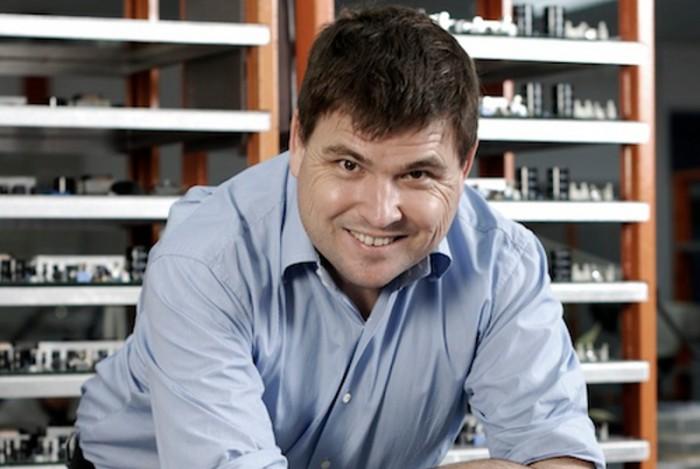 Hargreave poses for the camera as Contraves’ CEO

A website, which has now been removed from the web, boasted of the collaboration as CEO Hargreave welcomed BNS staff and even the Head of the Navy onsite to the Rheinmetall owned factory in Malacca and kept his office at the heart of government at Cyberjaya. 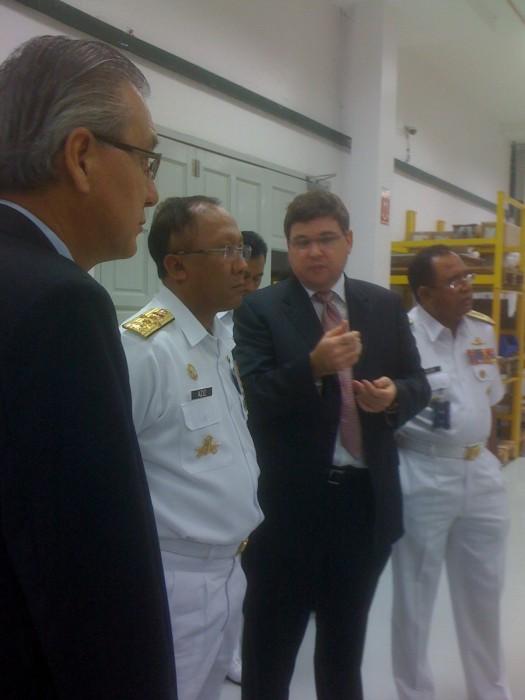 Heady days – visit by Chief of the Navy,Abdul Aziz bin Jaafar in 2011

Meanwhile, Rafizi has further disclosed that the quote from DCNS for a mere RM397 million was received by BNS (Boustead) even before the huge some of RM1.187 billion was forwarded to Contraves to make the purchase.

Perhaps there is a perfectly simple explanation. Perhaps the missing money is even still waiting and available to be used to rescue this disastrous collapsed project that has brought shame and loss to the Malaysian people?

What is certain is that at this point a major European company needs to step forward with its representatives and explain their role in this mysterious, murky affair once and for all.

*Update: This LinkedIn site has been removed offline since the article was published. We have approached Mr Hargreave for comment. He has not immediately responded.