Following Sarawak Report’s recent exposes on the appalling conduct of Rimbunan Hijau and WTK (two of Sarawak’s “big six” loggers) in Papua New Guinea and the Solomon Islands, SR can now reveal that Samling (another of the “big six”) has also wreaked illegal havoc in the same timber rich domains.

In one glaring example, the multi-billion dollar Yaw family company has evaded paying compensation owed to indigenous communities in PNG for nearly a decade in defiance of a court judgement against the company.

To do so, Samling has given the appearance of ‘skipping town’ and divesting its interests in PNG. Yet, we can demonstrate that in fact the family owned company still owns and controls significant assets in the country, which by rights ought to be seized to pay the debt.

Samling was founded by Sarawakian Yaw Teck Seng in 1963 and is jointly run by his son Yaw Chee Ming. The Yaw family have multi-billion dollar global assets. Yaw Chee Ming is married to the daughter of billionaire Sabahan businessman Lau Cho Kun of Hap Seng Consolidated.

Samling is well known for its close relationship to Sarawak governor and former Chief Minister, Abdul Taib Mahmud, who handed the crony company numerous timber and plantation concessions along with major construction contracts over many decades.

The links travelled abroad. SR has previously exposed how two mansions in the United States were passed from Samling to the Taib family in the early nineties, each transferred for just $US1 dollar.  Taib’s cousin Hamed Sepawi and his bomoh (witch doctor) were both listed as shareholders of Samling until the company de-listed from the stock market. 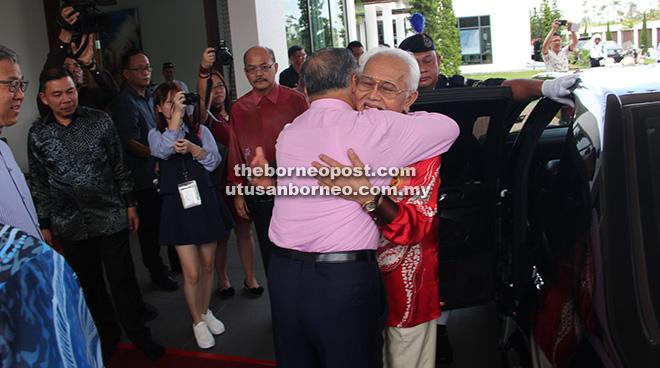 Concord Pacific Limited – Fined In Court But Never Paid Up

However, shortly before the judgement was passed in 2011, Concord Pacific de-registered as a company and Samling has not paid a cent to the communities since, SR has learnt.

The details of Concord Pacific’s criminal conduct was laid out in a damning 42 page judgement viewed by SR, which sought testimony from 1,800 community members and reports from three expert witnesses. 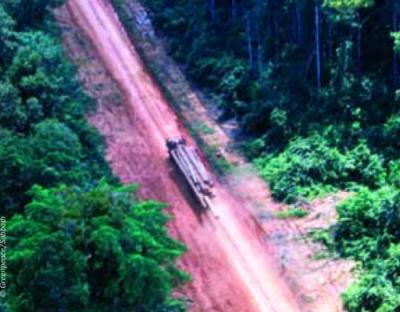 On top of illegally logging the area without community consent and causing irreversible damage to the environment, the loggers were accused of promising to build roads, schools and clinics which never materialised; sexually exploiting local women and of using police to intimidate landowners. Justice Cathy Davani highlighted that:

“The reports demonstrate that not only was there destruction to the forests and rivers but the way of life of the people was completely destroyed. The loggers chopped down useful trees like canoe trees, they razed sacred burial grounds, they impregnated local women wherever they went, leaving in their wake AIDS, venereal diseases and illegitimate mixed-race children. The children and their mothers, will now live with these permanent scars for the rest of their lives.”

In her scathing conclusion, Justice Davani pointed out that Concord Pacific had left the indigenous peoples of PNG’s Western Province utterly helpless and with nothing:

“The loss of customary land through blatant, illegal logging, is a loss that is immeasurable. As I said, the people now have a sense of hopelessness. I say ‘immeasurable’ because the loss, pillage and plunder of forests and the destruction left in the wake of these illegal activities, leaves the landowner with nothing. As I said above, nothing and completely, utterly helpless.” 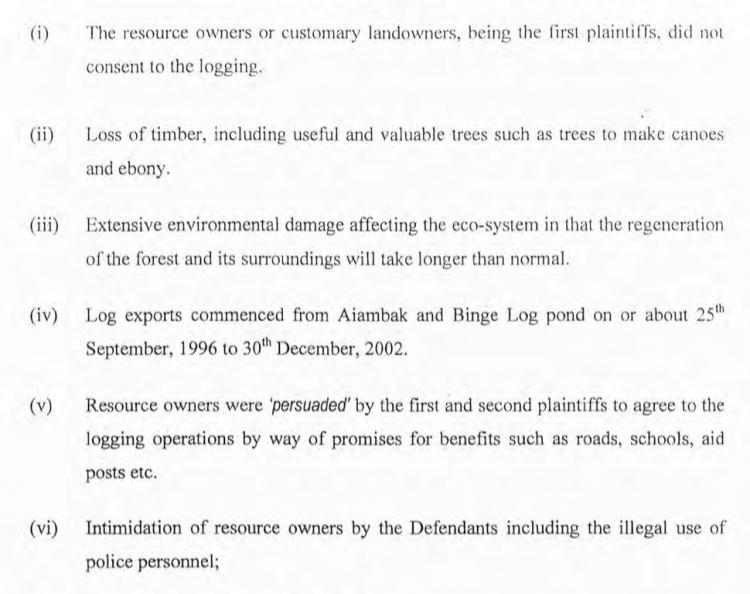 Following the de-registration of Concord Pacific, many believed that Samling had left the country, but SR can demonstrate that the Yaw family are still very much active in PNG.

In fact, just two months ago, six so-called incorporated landowner groups announced that they plan to go into a major oil palm development with a subsidiary of Bismarck Limited in East Kove, West New Britain. The project aims to convert 99,000 hectares of land connected to the New Britain highway.

According to official company records filed with the Investment Promotion Authority (IPA), Bismarck Limited has been active since 1998. At that time the company was owned by Yaw Teck Seng (also known as Hiew Seng), his son Yaw Chee Ming and two PNG locals called James Shindo and Anton Tokinga.

Although the Yaws have attempted to conceal their involvement by transferring their shares and ceasing to be directors in 2005, the company’s latest annual report shows that Samling is still very much in charge of Bismarck.

As of 2019, the company’s sole director and 98% shareholder is a Malaysian by the name of Theam Hock Chew. Hock Chew is a Director of Samling Energy and was previously the Executive Director of Samling’s operations in PNG, Myanmar, Indonesia, Mongolia and West Africa.

Hock Chew has direct shares in Bismarck and is also the s0le owner of Sharrington Limited (Bismarck’s main shareholder). PNG national Anton Tokinga holds the remaining 2 shares of the company.

And if there was any further doubt as to the links between Sharrington, Bismarck and Samling, a document filed with the IPA in 2013 highlights related party transactions between the various companies. It also provides a damning list of additional companies clearly linked to Samling’s activities in PNG, many of which are still active today. Such assets are there to be seized to pay Samling’s debts to the people the company was found guilty of exploiting. 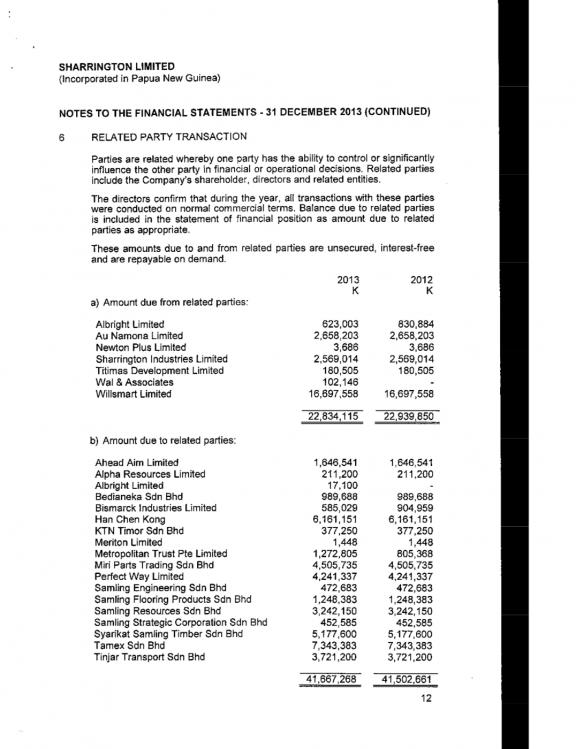 Myanmar provides a concerning recent example, where Theam Hock Chew was acting as Samling’s director of plantations. This from the campaign platform Global Atlas of Environmental Justice:

The concession was granted in a non-transparent way and has caused large social and environmental impacts. The concession development did not comply with domestic law or with international human rights principles. No free prior informed consent (FPIC) with affected communities was obtained and the area was incorrectly classified by the central government as ‘vacant land’.

Since 2011, about 6,000 acres (2,428 ha) were cleared by the company, including betel-nut and cashew orchards belonging to villagers. Loss of productive land has resulted in livelihood loss and increased debt levels as many villagers have been unable to meet their basic needs. Some were forced to become day labourers for low wages. Money offered by the company to compensate damages was too little and many villagers refused the compensation.

Fertilizer and pesticides use have moreover caused water pollution. While some wells were constructed by the company to deal with the declining availability of clean water sources, some of the wells were soon polluted by animal feces due to poor design. Consequently, villagers reported livestock dying, skin irritations and dysentery.

Identical problems have of course been suffered in Borneo and in PNG caused by the practices of the very same Sarawak family timber mafias, who care not one jot for the health and happiness of the owners of the lands they have been plundering nor for the valuable natural environment they have been happy to trash to make themselves richer and richer. 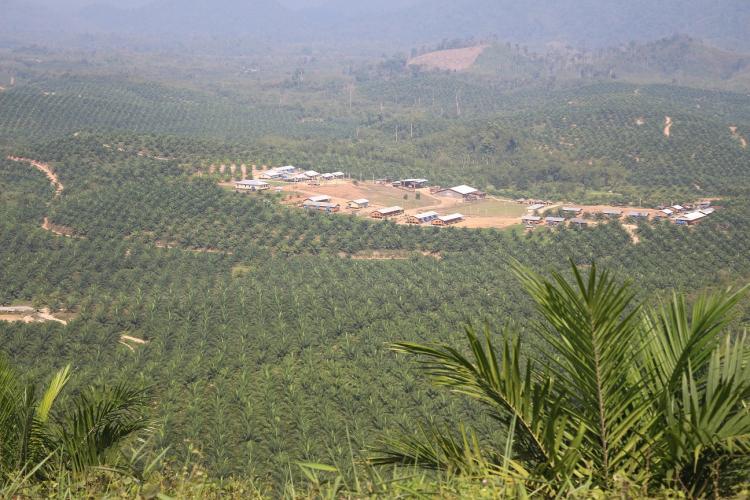 Human rights advocate Dr Kua Kia Soong has responded to SR’s earlier investigations and urged the Malaysian Government and its agencies to investigate Malaysian loggers in PNG and elsewhere.

SR emphasises that it is time for Malaysia to tackle the source of this criminality back home in the state of Sarawak, where these timber mafia companies have been protected by the state government for far too long.