How Najib Launched His Coup Against His Own Country .... 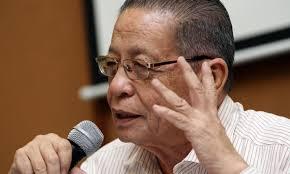 On July 28th of last year the Prime Minister of Malaysia drove a coach and horses through the constitution of Malaysia in order to put himself above the law.

His excuse was that there had been a “plot” orchestrated by all the leading figures in Malaysia’s independent forces of law and order to “topple an elected Prime Minister”.

But, every shred of evidence in the 1MDB case (which is what this is all about) shows only one thing, which is that the Prime Minister had been stealing billions from Malaysian public funds in a massive abuse of trust and power.

After the Petrosaudi papers had triggered a political storm in early 2015 the Prime Minister, who at the time was telling all and sundry that he had very little to do with the running of 1MDB and didn’t know much about what might have happened, was forced to launch several enquiries.

Four so-called task forces were led by the MACC (local enquiries into SRC and abuse of funds), The Central Bank (money transfers and regulations), the Attorney General and the Inspector General of Police.  Also looking into the affair was the Auditor General and the Public Accounts Committee, who were examining the baffling and opaque accounts of 1MDB in order to find where billions had disappeared to.

By mid-July these various independent bodies had come to one conclusion – a vast sum of money had clearly been stolen from 1MDB and much of that money had ended up in Najib’s accounts in KL.  The money had been used not only to fund lavish frivolities for the PM and his wife, family and associates, but also to influence the outcome of a very tight election where for the first time since Independence the grip of the ruling BN coalition looked set to be broken by a win for the opposition.

So, not only had the people’s development money been stolen, but so had their democratic right to choose their own government, allowing the very criminals who had stolen the cash to buy and cheat a political victory, which would continue to enable more pillage and criminality in the highest echelons of government.

The Auditor and Public Accounts Committee had meanwhile also crucially established that far from being a distant overseer of an ‘Advisory Committee’ to 1MDB, the Prime Minister was the sole shareholder and decision-maker for the fund and the only man able to sign off investment decisions, such as the Joint Ventures with PetroSaudi and Aabar.  A special provision, Section 117, had been secretly inserted into the articles of the company giving Najib as Minister of Finance total control of the fund.

So, Najib could not escape full responsibility for every theft of money and diversion into his account. 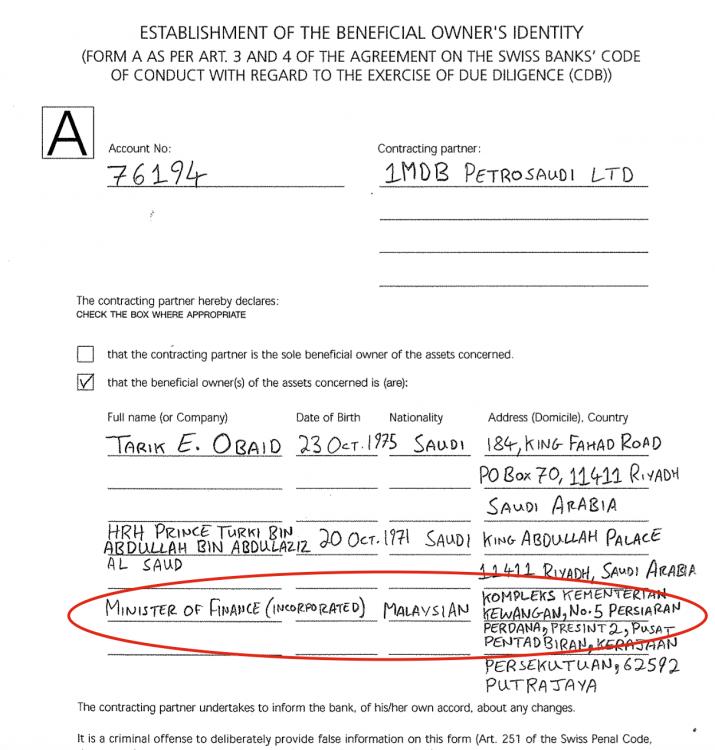 So, by mid-July, as has now been widely reported and understood, the most senior figures in Malaysia’s law enforcement agencies were in a difficult situation. There seemed no alternative in this public scandal but to bring the perpetrator (Najib) to book.

If the Prime Minister had previously thought he had kicked matters into the “long grass” by ordering several enquiries, which could then be managed, he had grossly miscalculated. The theft was far too large and blatant and far too much information had seeped out. He had lost control of the situation and the four key figures in charge of the law enforcement agencies concerned felt they had no alternative but to inform the Agong and the Prime Minister’s Cabinet colleagues, as protocol demanded and to proceed with a prosecution.

The Agong agreed after a secret consultation and Najib was due to be informed in cabinet of the situation and asked to step aside on behalf of his Deputy, while the prosecution took its course.  Charges had been drawn up and the plan was to present Najib with a fait accompli in Cabinet in late July.

Of course, the Prime Minister heard of the plans and he already knew just how extensive and dangerous the investigations had become. Instead of resigning he unconstitutionally hit back with a use of force in a series of devastating moves on 28th July, hours before he was due to be asked to step aside at a cabinet meeting.

This week the DAP opposition leader Lim Kit Siang has highlighted how Najib used the excuse of an alleged “plot” to justify his illegal, strong arm tactics.  These same allegations are now being revived by acolytes of Najib against the same targets (the former heads of the independent task forces) which has lead many to suspect that the Prime Minister is seeking to shut the matter down further and act against these “plotters” in response to the unravelling of his cover-up abroad.

An UMNO blog launched on the very day of the coup painted Najib’s strategy perfectly, as Lim Kit Siang has today reminded. His first strike was to replace the Head of Special Branch, who then sent his forces to intercept the Attorney General as he arrived that morning at his chambers to complete his side of the legal task of charging Najib.

Without a chance to even enter his office or clear his desk the shocked law chief was frogged-marched home and a statement was issued on his behalf saying that he had resigned owing to health reasons.  Instantly, a hand-picked replacement was announced, none other than the present Apandi Ali who had long been identified as one of Najib’s key pet law officers.

This was unconstitutional, as legal authorities immediately pointed out, since only the Agong and not the Prime Minister has authority to dismiss the AG. Najib ignored them.

The new blog called The Recounter meanwhile, elaborated in highly revealing terms that day the exact strategy behind these moves, while at the same time laying out whom the Prime Minister planned to target next in his determination to defy prosecution for his actions. 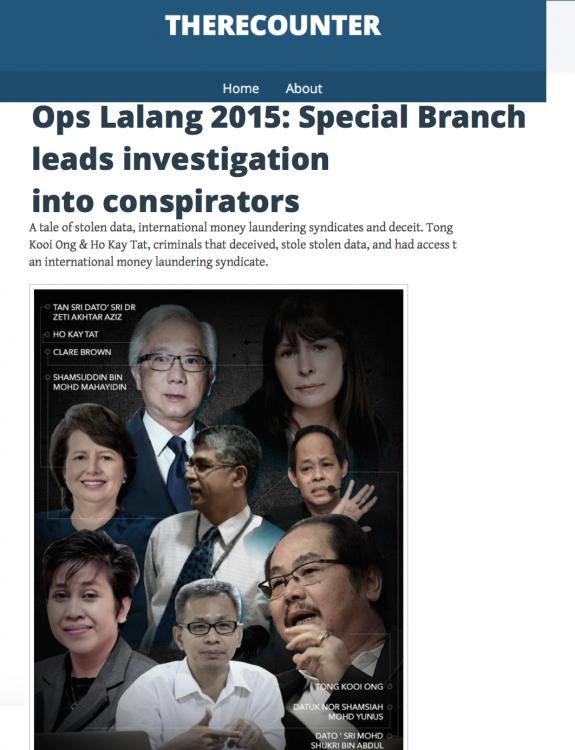 As well as listing the “13 people” alleged to be “in a conspiracy” against the ‘innocent’ PM for motives that remained unclear, The Recounter , which still exists to put out occasional messages justifying Najib, explained exactly how the PM now reckoned he had grasped the reigns of power.

In an article tellingly titled “Ops Lalang 2015″, in reference to a major crackdown on liberties in the 80s, the blog crowed about the significance of Najib’s new appointments at the Head of Special Branch and the Attorney General. Thanks to a handy Section 124 of the Penal Code, the writers claimed, this replacement and control of the heads of Special Branch and the AG gave Najib the power to “imprison anybody” for up to 20 years, under the ironic charge of “threatening democracy”! 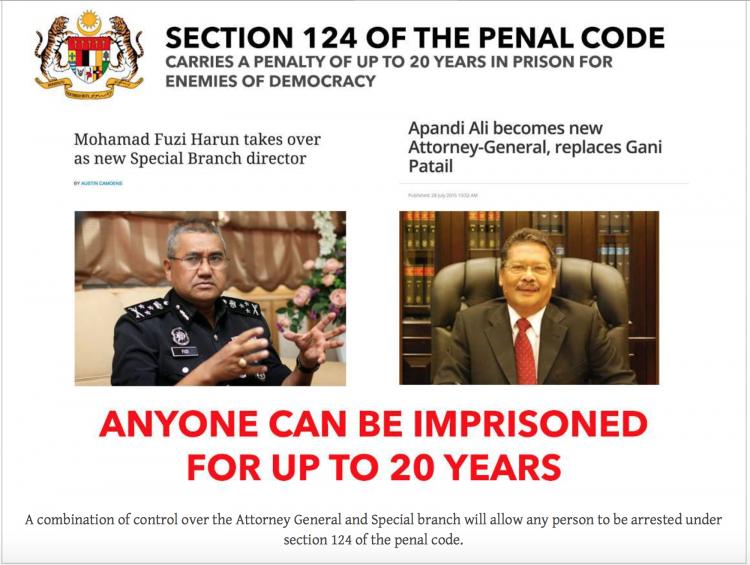 “Anyone can be imprisoned”

This was Najib’s blatantly illegal move to fight off prosecution and to target any of his enemies as he chose, for the very crime he was himself most culpable of, which was undermining democracy by subverting an election and destroying the independence of the forces of law and order.

Najib’s other key weapon arrived with the decision by the head of the police the IGP, Khalid Abu Baker, to take up his cause.  To begin with Abu Baker had followed the direction of the investigations like the other supposedly independent bodies – now he is regarded as a key enforcer for Najib.

Najib’s thinly veiled spokespeople at Recounter were soon being widely quoted throughout Malaysia, as it was speculated that the people listed (including the Editor of Sarawak Report) would soon be charged with this imprisonable crime.  Named by The Recounter were journalists, the Head of the Central Bank, key officers at the MACC, prosecutors and the most vocal member of the PAC, Tony Pua.

Soon an arrest warrant was indeed made out against the Sarawak Report Editor under this Section 124, which proved unenforcible after INTERPOL refused to give it credence.  The Recounter next crowed that the Head of the Central Bank had been taken ill from stress and then put out articles insinuating off-shore corruption against her family.

Prosecutors were arrested and interrogated and then kept under Special Branch surveillance – ‘coincidentally’ the prosecutor Kevin Morais, who had worked on the charge sheet against Najib, was kidnapped shortly after and found murdered in a barrel of solid cement….

Much of the world press responded to these outrages by reporting that Najib had ‘strengthened his position’ by these moves, while barely reflecting on the illegality and desperate nature of the Prime Minister of Malaysia’s whole-scale attack on the governing establishment and its institutions in order to avoid arrest.

Again helping to substantiate widespread suspicions from within Najib’s own camp, it was The Recounter that conveniently next confirmed the speculation that the fire that then broke out at the Bukit Aman headquarters of the Royal Malaysian Police was no coincidence. 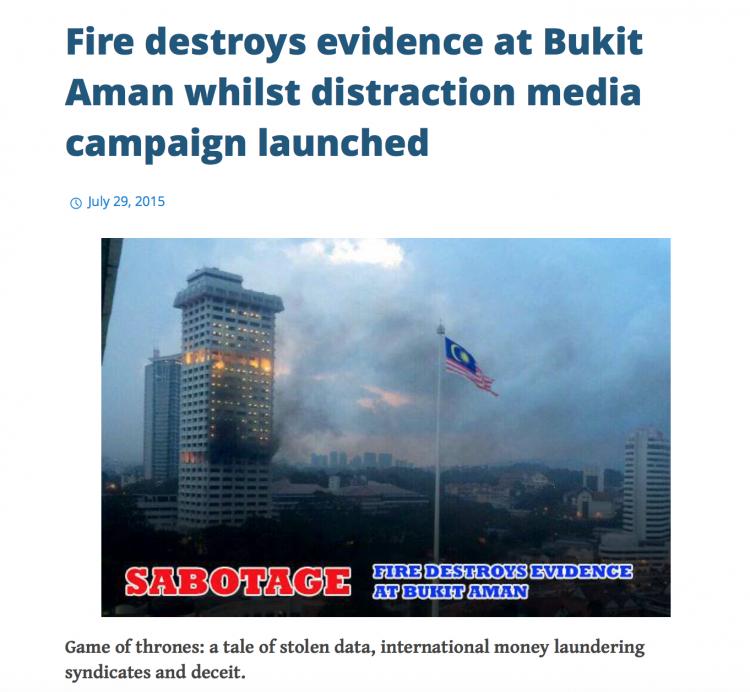 Most Malaysians suspected that the fire had burnt the evidence on 1MDB not any alleged conspiracies against Najib!

Blaming the fire on “the conspirators” who were allegedly trying to wipe out evidence of their own nefarious ‘plotting’ and supposed ‘links to international money-laundering networks’ (their motive for conspiring against the pure PM?) The Recounter confirmed that the two floors that were burnt out contained the records for the fraud and white collar crime sections of the investigations unit.

Every criminal in Malaysia, along with their PM, must have heaved a deep sigh of relief  over such welcome news. The 1MDB investigation papers were thus destroyed.

However, unfortunately for Najib the records of his crimes extended far beyond Malaysia’s borders and have come out into the open with a vengeance, despite his desperate actions. 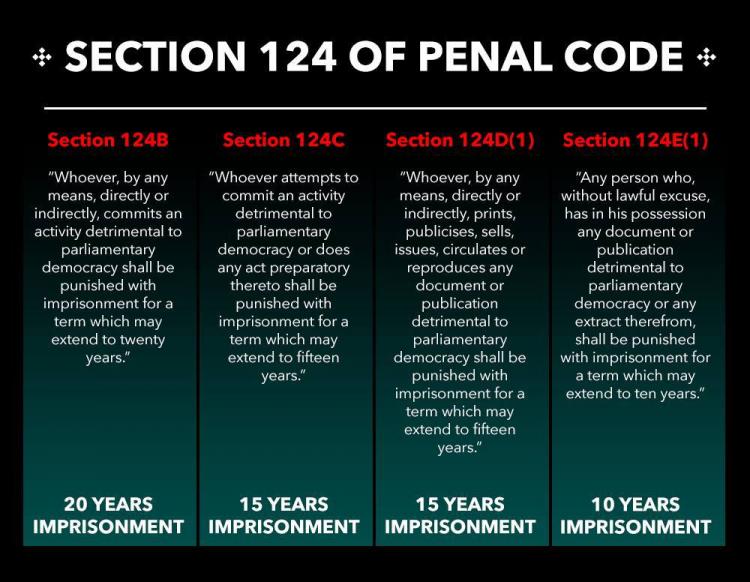 Thus, as Lim Kit Siang has pointed out, we are now seeing once again Najib’s cheerleaders,  in particular UMNO ‘student leaders‘ issuing threats against the ‘plotters’ and seeking to imprison the now largely forcibly retired ‘conspirators’ who tried to do their public duties in the course of their Task Force investigations into 1MDB.

So far, the IGP – toady to Najib that he might be – has refused to start ‘investigating’ and imprisoning these once senior leaders of Malaysia’s independent bodies. However, of course, under Section 124, with his control of Special Branch and the AG, Najib plainly reckons he could do it anyway.

On top of Section 124, he has of course since implemented extra handy legal instruments such as SOSMA and the new National Security Act, both of which enable him to arrest without a warrant, imprison and even kill anyone he chooses on “suspicion of terrorism” under conditions of total impunity and without the right to inquests or any review of the actions of his special forces.

The Agong and Council of Rulers tried to return this outrageous new law for revisions, but Najib ignored their constitutional right to do so and has passed it anyway.

This PM plainly hopes that, after that dodgy moment when those awkward charges were so nearly brought before the Cabinet, he now has matters well back under control.  Others might choose to disagree.